Net Profit for the fourth quarter was QR 214 Million, reversing the net loss incurred in the first nine months due to the COVID-19 related closures which restricted trading during the year. This result contributes to a full year profit of QR 14 Million.

Mr. Keith Higley, Director, said, “the strong result in the fourth quarter, building on the improvement reported in the third quarter, rounds off a significant turnaround following the first half of 2020”. 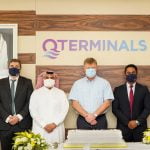