According to Mannai Auto Group, the official Cadillac dealers in Qatar, the all-new 2017 Cadillac CT6 is the most anticipated new arrival in terms of customer demand and general curiosity, with pre-orders and showroom visit requests increasing significantly since the arrival of the first test vehicles this summer.
The CT6 scripts a new storyline in Cadillac’s ongoing evolution which evokes the senses and delivers class leading performance. Through the integration of new technologies, the first-ever Cadillac CT6 creates a new formula and substantially expands the Cadillac portfolio.
In Qatar, the CT6 sedan will be available in two trim levels at launch – Luxury and the range-topping Platinum trim.
“The CT6 is a new personification of the prestige sedan, combining space and luxury with agile driving dynamics,” said Mr. Mahmoud Skhiri, General Sales Manager, Mannai Auto. “A range of trims and price points furthers the competitive edge, and reflects the CT6’s comprehensive package that offers the style, performance and technological advances customers in this segment appreciate and expect from Cadillac.”
The range of options and price points aim to draw new buyers and satisfy existing customers looking to upgrade to the latest from Cadillac.
Customers will initially receive two engine choices – a 3.6L V6 or 3.0L Twin Turbo V6 – both coupled to a state of the art 8-speed transmission, with standard All Wheel Drive and a broad range of high-technology systems.
The Cadillac 3.0L Twin Turbo V-6 engine is rated at 404 horsepower and 400 lb-ft of torque (543 Nm); while the all-new, 3.6L V-6 generates 335-horsepower.
Efficiency is enhanced with the industry’s first application of cylinder deactivation technology on a turbocharged V-6 engine. Cylinder deactivation temporarily deactivates two of the cylinders in light-load driving conditions to enhance efficiency and seamlessly reactivates them when the driver demands full power.
In parallel, the 3.0L Twin Turbo also comes packed with stop/start technologies to conserve fuel. With the system, the 3.0L Twin Turbo is shut down in certain driving conditions such as stop-and-go city driving to reduce fuel consumption, automatically restarting when the driver takes his or her foot off the brake pedal.
To further ensure seamless agility, the CT6 is equipped with Auto Vehicle Hold – a driver-selectable feature that prevents forward/rearward vehicle creep when the driver’s foot is off the brake. It reduces fatigue during heavy stop-and-go traffic and improves vehicle control on steep grades.
Cadillac has made in-cabin technological advances as well, including the Rear Camera Mirror, Enhanced Night Vision technology and the pioneering 34-speaker Bose Panaray audio system.
An interesting new addition is high-resolution streaming video to the function of a traditional rearview mirror, removing obstructions of passengers, headrests and the vehicle’s roof and rear pillars. The groundbreaking feature comes standard on the 2017 CT6 Sedan.
Cadillac’s innovative new streaming video mirror improves field of vision by an estimated 300 percent, or roughly four times greater than a standard rearview mirror. Thanks to a high dynamic range, the camera’s video feed reduces glare and allows a crisper image in low-light situations, versus a traditional glass electrochromatic, or auto-dimming, rearview mirror.
Researchers and engineers working on this Cadillac innovation have been awarded 10 patents – one for the streaming video mirror and nine for video processing. The patents cover innovations in the wide field of view camera image calibration, de-warping, glare reduction and camera hardware design.
If they wish to do away with this convenience, drivers can disable the mirror’s video streaming function. Flipping a toggle on the underside of the mirror will revert it to a traditional mirror.
The 2017 CT6 also comes packed with a 360-degree camera view around the vehicle, displayed on the Cadillac CUE screen – which helps reduce blind spots around the vehicle. 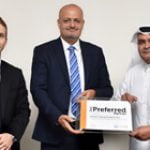