MANNAI CORPORATION REPORTS EBITDA QR 536 MILLION ON CONSOLIDATED REVENUE OF QR 5.7 BILLION IN THE FIRST HALF

Mannai Corporation Revenue increased by 10% to QR 5.7 Billion compared to QR 5.1 Billion in the last year.

Gross margin of the group is QR 1.2 Billion

While profit before interest and tax expenses increased to QR 341 Million, the Net Profit of the group declined by 47% to QR 88.5 Million in the first half.

During the period, interest expenses increased by 58% to QR 205.1Million compared to QR 129.7 Million last year as a result of the increased investments in the Information Technology segment.

The Information Technology segment delivered increased revenues of 17%, 80% of the group’s first half revenues and EBITDA growth of 45% compared to first half 2018. 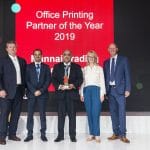